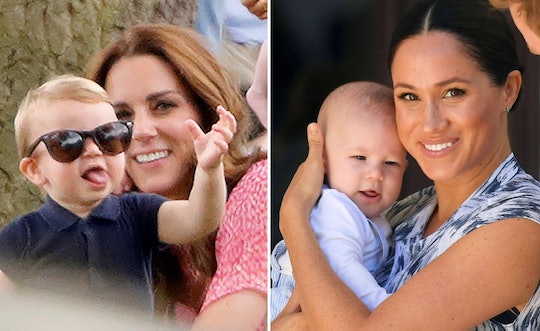 Prince Louis & Archie Have Lots In Common, Including Their Star Sign

And their love of the outdoors, of course.

Prince Louis and his little cousin Archie have not really had the opportunity to spend much time together, but they’re still cousins. And still little royals, whether Archie’s parents, Prince Harry and Meghan Markle, are living their new non-royal life in California or otherwise. Their fathers, Prince William and Prince Harry, are brothers. Therefore it’s only natural that these two cuties would have lots in common. More than you might have guessed, in fact.

Prince Louis came into the world on April 23, 2018, while Archie was born on May 6, 2019. This makes both royal cousins Taurus babies, so it certainly makes sense that they would be similar in several ways. According to Mind Body Green, a typical Taurus is “grounded, sturdy, and interested in the beauty of the natural world.”

This sounds like these two would have a great time together at the playground, no?

#2. They both have unconventional royal names

When Kate Middleton gave birth to Prince Louis , royal watchers were desperate to know what she and Prince William had named their third baby. Their first two children, 8-year-old Prince George and 6-year-old Princess Charlotte, they went for classic royal names, after all. So it came as something of a surprise when they announced his name was Louis Arthur Charles. Yes, he was named after Prince Philip’s uncle Louis but still. Not exactly as conventional sounding as George or Charlotte. The same was true of little Archie Harrison. His middle name came from his father (son of Harry), but Archie sort of came out of nowhere. In a good way.

#3. They both use cute nicknames for their grandparents

Archie and Prince Louis share a grandfather and grandmother, of course. The Prince of Wales and future King of England, Prince Charles and his wife, Camilla, Duchess of Cornwall. They each have cute little nicknames for them. While Archie calls him “Pa,” Prince Louis and his siblings reportedly call their grandmother “GaGa.”

#4. They’re both not into Zoom calls

Here’s something the rest of the world has in common with Archie and Prince Louis; neither one of them loves a Zoom chat. Royal reporter Omid Scobie told The Daily Express that Archie likes “making impromptu little cameos” when his parents are trying to work via Zoom, while Prince Louis rather famously would just end the Zoom when his parents were trying to catch up with their family, according to Prince William.

They both keep chickens.

Whether you are visiting royals in California or Norfolk County in the UK, you are going to get some farm fresh eggs. Both Archie and Louis keep chickens with their parents, although Archie does get his very own “Chick Inn” while Louis shares with his siblings. But this also means that he gets to share the workload.

#5. They both seem to love the beach

Archie and Louis both seem to love the beach.

In keeping with their outdoorsy Taurus natures, all signs point to both Archie and Louis loving the beach. During his parents’ bombshell interview with Oprah Winfrey in 2021, Archie was seen running barefoot along the beach with his mom. As for Louis, his parents shared a video of the whole family on a windswept beach in honor of their 10th anniversary.

#6. They’re both in nursery school

Archie and Prince Louis both go to nursery school.

Finally, Archie and his cousin Prince Louis both proudly head off to nursery school as toddlers. Prince Louis started at Willcock’s Nursery School last spring, while Archie attends an undisclosed local nursery school where he learns emotional literacy and sustainability.

Continents and oceans separate them, but these cousins are living pretty similar lives. Now they just need to hang out.

More Like This
Why Prince Harry Feels Lucky To Be A "Father With A Platform"
Meghan & Harry Celebrated Their Anniversary As A Family Of Four For The First Time
Kate Middleton Explains Why Her Kids Couldn't Attend The Top Gun: Maverick Premiere
Prince Harry & Meghan Markle Could Take Us Inside Their Home For A New Docuseries