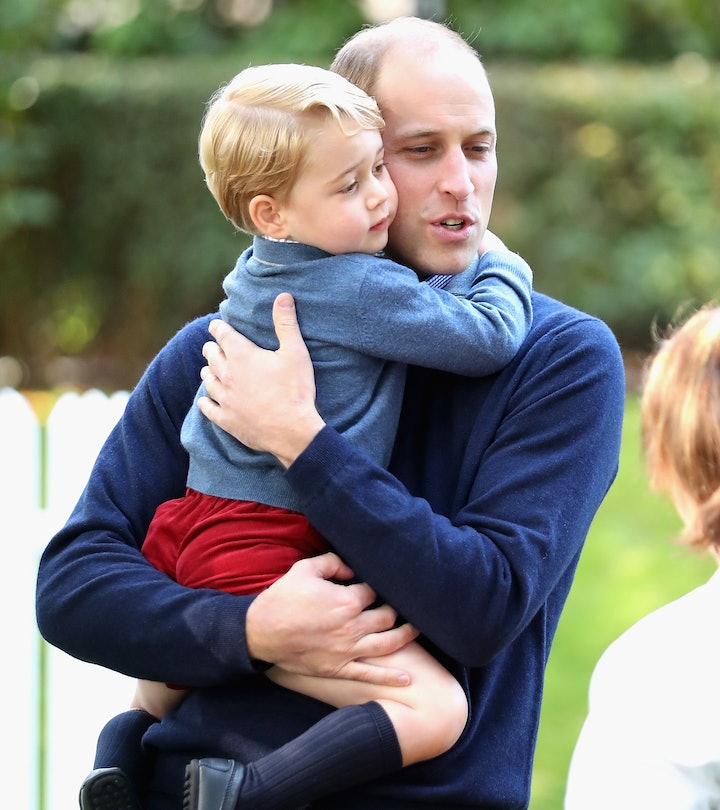 If ever there were two peas in a cute little royal pod, it’s Prince William and his 9-year-old son Prince George. These two just seemed like they were destined to be best friends from the moment the oldest of the Cambridge kids was born, simply because they have just about everything in common. Here are at least 10 ways they’re so alike.

Let’s start with the glaringly obvious, shall we? Both Prince William and Prince George are destined to sit on the throne as Kings of England some day. As firstborn sons, this is their destiny. And it’s one that Prince William thinks about often when it comes to his son. In fact, he and wife Kate Middleton made a conscious decision to protect their son from his heavy future responsibilities for as long as possible. “There'll be a time and a place to bring George up and understand how he fits in, in the world,” Prince William said in a 2018 interview. While Prince George reportedly knows about his future role now, his parents are always looking out for his best interest.

Princess Diana and Prince Charles welcomed Prince William on a gorgeous June day in 1982, and three decades later he welcomed his own first born with Kate Middleton in July 2013. These two are summer babies, and anyone who is a summer baby knows that’s a special breed indeed. Birthday parties outside in the sunshine, always celebrating your big day during school break. It’s a mixed bag of tricks but mostly pretty great.

#3. They’re both big brothers who get annoyed at their siblings.

If you haven’t seen videos of Prince William getting irritated with Prince Harry when the two of them were little kids growing up in Kensington Palace, you are missing out. Prince William frequently looked like Prince Harry, who is three years younger than him, was driving him up the wall. It’s a feeling Prince George, also an oldest brother, can probably understand. Kate Middleton has said that he gets “annoyed” at both 7-year-old Princess Charlotte and 4-year-old Prince Louis, but lucky for him there’s no video footage of it.

Despite their incredibly public lives, both Prince William and Prince George have struggled to overcome their natural shyness at times. Prince George was rather adorably shy meeting tennis player Novak Djokovic, while his dad Prince William had his own reputation as a shy future king in school.

#5. They sure love their moms.

Presumably most people love their moms, but both Prince William and Prince George seem to share an extra special bond with their mothers. Prince George and Kate Middleton obviously have a relaxed, loving relationship full of laughter, while Prince William has made honoring his own late mother Princess Diana one of his life’s missions. Both of them have a deep connection to their moms, and it’s beautiful to see.

Prince William has definitely passed his conservationist ethos on to his oldest son. Prince George is so worried about the environment that he gets “annoyed” by litter bugs who keep making a mess of the road after he’s just cleaned it up. And of course, Prince William launched the Earthshot Prize in an effort to halt climate change.

Prince George is famously a fan of soccer, both playing and watching. Just like Prince William. He joined his parents at the Euro Cup finals, cheering for England and getting comforted by his dad when they lost. And of course, Prince William joins his son at his own soccer games, where they probably talk a whole lot about their favorite team Aston Villa in the car ride home.

Prince William grew up learning how to ride horses at his family’s country home of Highgrove Estate, and now it seems Prince George is following in his dad’s footsteps. Or hoofsteps as the case may be. Perhaps Prince George will eventually play polo like his father as well.

Prince William has long worked to ensure the conservation of wildlife, particularly in Africa as the royal patron of the charitable organization Tusk. His oldest son, famously a fan of snakes and all animals, recently held a charity bake sale to support the organization himself.

All of their similarities, their love of nature and their natural shyness and their mutual bond with their moms, bode well for them to enjoy a lifelong close relationship. Which also bodes well for the crown itself.