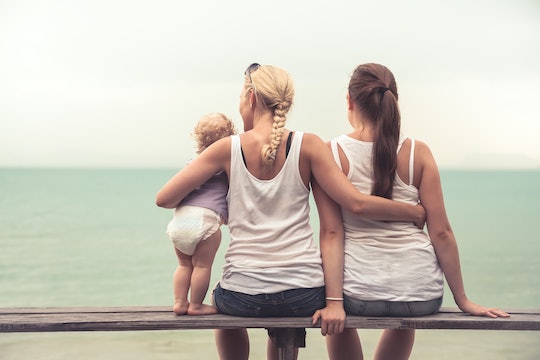 13 Moms Share How They Explain LGBTQ People To Their Kids

It’s 2018, marriage equality is finally real, all but eight states allow LGBTQ couples to adopt, and there are laws on the books against hate crimes targeting queer folks. Turn on your TV and you’ll find lesbian characters and gay actors and storylines featuring trans people. Our kids are growing up in a world that's slowly, but surely, normalizing the LGBTQ identity. That doesn't mean inequality, discrimination, hate, and violence isn't happening, though, which is why it’s so important to continue explaining and discussing LGBTQ people with our kids.

Just two years ago, the FBI released a report showing that anti-LGBTQ hate crimes were on the rise. Twenty-eight trans people were murdered in the United States in 2017, and 10 have already been killed this year. According to the Trevor Project, LGB youth contemplate and attempt suicide at much higher rates than their heterosexual peers. Clearly, we, as a country, still have a long way to go in terms of making sure we treat everyone with respect and dignity and kindness and compassion, regardless of their identity or sexual orientation. I have a 4-year-old son I'm raising to be an accepting and loving adult, and that means doing what I can to normalize all LGBTQ+ identities. But as a queer woman married to a cisgender male partner, my son isn’t really as immersed in the LGBTQ community. I don’t currently have many LGBTQ friends in my area (and the ones I do are also cis-women married to cis-men), so he doesn’t get as much exposure to other types of families, either. And while I try to read stories and show cartoons that include LGBTQ people, he’s still absorbing the messages of heteronormativity one can find on any run-of-the-mill, mainstream cartoon or kid's movie.

So I asked some moms to share how they’ve discussed their LGBTQ+ identity with their kids, or how those identities have been normalized in their homes. Their answers definitely have me feeling hopeful for future generations, and even more empowered and emboldened to make sure I do my part.

More Like This
The 4 Main Parenting Styles & Which Is Best For Kids
Real Parents Share What Time They Let Their Kids Rip Into Gifts On Christmas Morning
If Your Kids Love Their Elf, You Don't *Have* To Put Him Away On Christmas
Festive Mommy & Me Holiday Nail Ideas To Try