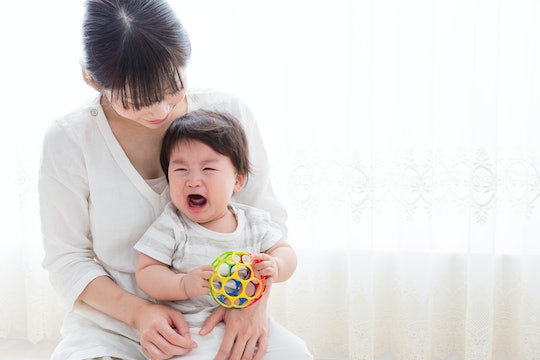 51 Things That Made Me Cry When I Was Postpartum

I was a big cry baby way before I became a mother. I enjoy shedding a few tears to romantic comedies, commercials, talk shows award ceremonies, and even social media posts. I guess I just have an over-developed sympathy reflex. Pregnancy, however, sent me over the edge. I found myself crying at things that weren't sad at all, and once I had the baby, the list of things that made me cry when I was postpartum was hysterically long. Like, if I wasn't too busy crying I would have just been impressed.

At first my husband would look really concerned and baffled, trying to fix whatever he assumed was wrong as quickly as possible. Soon I took to mouthing "just hormones" as I wailed, so he knew it was nothing serious and that I literally had no control over my tear reflex. The worst weepy postpartum experience I had was when my son was 2 months old. I was waiting for a package to be delivered and had posted a note on my door, asking the mailman not to ring the doorbell as the baby was sleeping. He ignored that very obvious note and not only rang the doorbell, but also banged on the door loudly until my son woke up screaming from a nap that took me over an hour to get him to take.

The poor delivery guy must have wished he had a time machine, as a wailing new mom and matching howling infant opened the door, in floods of tears, pointing at the note and asking him, "Why?" That moment, and the following others, were just the tip of postpartum crying iceberg my friends.